The Mezhirech agricultural colony, founded in 1846 by Jews from Mogilev guberniya

In the mid-19th-century, one goal of the Russian government was to encourage Jews to work the land.

The government provided land in six guberniyas (provinces) of the Russian Empire for this purpose, including Yekaterinoslavskaya guberniya (today Dnepropetrovsk and Zaporozh’ye region in Ukraine).

One of these was the agricultural colony of Mezhirech. The Tzar provided many benefits for Jews who moved to these agricultural colonies. They received free land, government-built houses, no-interest government loans to buy cattle, paid moving expenses and, importantly, their sons were exempt from the 25-year army conscription.

In summer 1846, 40 Jewish families from the town of Mogilev and Mogilev guberniya set off on a two-week journey by horse to Yekaterinoslavskaya guberniya. When the group arrived, they discovered that their promised houses weren’t ready, and they were housed in peasant homes in nearby villages.

In fall 1847, the new houses were finally ready, a year later. The walls were constructed of clay, the roofs of dry grass. In spring 1848, the population, almost all adults, was sick with scurvy, while 30 others had died from various illnesses during the winter.

In 1853, another group of Jews from Mogilev guberniya joined the settlers, and the total population of Mezhirech was 372 residents. By 1890, this colony had became one of the most successful in the region. Each family lived in its own wooden house; each family had two or more cows. The colony also had its own synagogue, mikvah, Jewish day school and cemetery.

Here is a list of the heads of the first 40 Mogilev guberniya families who arrived in 1846: 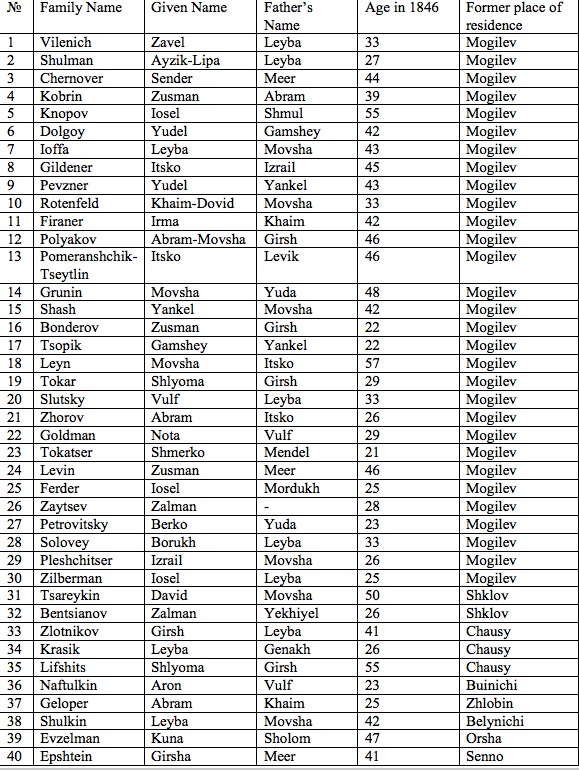